The Evolution of Process 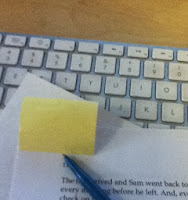 Last week I did a guest-speaking gig in a creative writing class at the University of Toronto, the topic of which was the writing process.

Process is something that, in my experience at least, not many writers speak publicly about in great detail. As I was preparing to speak to the class (which was a fantastic couple of hours spent with some very bright and lovely writers, I might add) I realized just how specific to short stories my writing process has become. Everything from how I conceive of a character's life to how I build a setting, to the emotional and structural concepts that I feel are most germane to my particular voice and style are all tailored toward a story arc of somewhere between seven and thirteen pages. This is not a naturally-occurring phenomenon, but something I've worked at and cultivated over time.

I have become very attached to the idea of the narrative as a briefly opened window. Each story gives you a peek into a life, and then the window closes and reader and characters both go on their merry way.

But what happens when I'm not allowed to close the window?


Writing a novel, as I'm currently attempting to do, is proving challenging given the short-story-specifc procedural tendencies I've created for myself. I think it might be time to reinvent the wheel if I'm hoping to keep on rolling.
Newer Post Older Post Home