Been Reading: The Orchid Thief by Susan Orlean 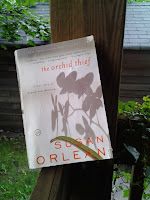