Been Reading: Whirl Away by Russell Wangersky 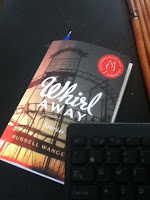 In a past life, I wrote a lot of book reviews. For a while they were all I was able to get published regularly. Book reviewing is a pretty good racket for a broke creative writing grad: free books and seeing your name in print make for very satisfying compensation.


But, when you work in publishing, there comes a point when you are no longer permitted to publish reviews. The possibility of a conflict of interest becomes too great, and, whether you like it or not, that particular door is closed for you. That door closed for me much earlier than I would have liked, not because I wish I could still publish reviews, but because I miss the level of engagement reviewing forces on the reviewer. In the years since, I've found that my appreciation of what I read has changed. There's a very helpful distillation of content that takes place when you write about what you've read. The books I feel most connected to, and the ones that I have the most visceral memories of, are the ones that I've written about.

I've recently been digging in to Whirl Away, a collection that has recently garnered so many award nominations and accolades I felt almost silly adding my two cents to the mix. Wangersky deserves all the acclaim he's received. The writing is damn good. You know, I know it.

The thing that's compelled me most about this collection is the fact that many of the stories are able to make small that which is massive. I tend to dislike reading about “big” events. I glaze over when I read jacket copy about startling family crises, tragic, untimely deaths, the crushing reality of war. I've slowly developed much more of an interested in the minute and the intimate than the large and the public. It's a personal preference that I've never really tried to unpack. I've just accepted it.


Wangersky walks the fence between these two worlds. “Open Arms” is the deftly drawn first-person narrative of a middle-aged woman trying not to reveal her desperation, and her deep-seated guilt, as she leaves messages for a boyfriend on a bender. It's one of several stories that crests and falls with the internal struggle of a singular main character. But Wangersky peppers the collection with stories like “911,” about a paramedic who essentially steals an ambulance and accidentally kills a would-be patient in an effort to be a hero, and “Sharp Corner” about a couple who live at the apex of a turn in a road so deadly their front yard becomes a regular scene of carnage.


The beauty of these stories is their restraint. What might be dealt with melodramatically is treated with the same character-driven specificity as the more intimate stories. “Sharp Corner” especially is so rooted in the husband's (often creepy) obsession with the death in his front yard that I found myself anticipating another horribly grisly incident solely to see how it would build/destroy/contort his character and the marriage at the heart of the story.


Many writers try to make this big-events-in-service-of-intimate-details balance work, I myself have attempted it to such terrible results that the stories have never been seen by eyes other than my own. But Wangersky weights the conflict exactly right, a rare and very much appreciated gift.